Pang yourself to the infinitude of absolute mind 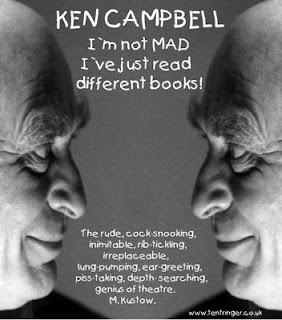 OK, here’s my current list:
Writing
Scripts (clues at least, to finding some)
Looking on AbeBooks I could see Skungpoomery, School for Clowns, Old King Cole, the Bald Trilogy (Recollections of a Furtive Nudist, Pigspurt and Jamais Vu) – those sometimes sold separately - Violin Time or The Lady From Montsegur.
Visual recordings

DeepLeaf’s Illuminatus!
(Listening to Ken reading the Appendices as I type)

An excerpt from Jeff Merrifield's thesis (mentioned in the Beadle clip)
Illuminatus! Amazing adventures in putting Science Fiction on the stage

History of Comedy - Part One: Ventriloquism article in The Guardian

And finally, a quote from an interview with Ken three years ago, which you can find in the Guardian archive:

Not content with itemising his autobiography on stage, Campbell is currently engaged in teaching Doris the parrot her own. So far, he says, she can say, "'I used to be an egg and then I hatched out, didn't I? All fluffy at first, then the feathers' ... she's working on the next bit now." Sometimes, though, Doris comes out with unexpected bits of her own, such as "I'm up 'ere, you're down there ... shall I do my silly noises? I think I will ... whoops!" And as her limited repertoire also includes a formidable impression of the telephone, Campbell can't answer it for a while whenever it rings "because it's probably only her. She does three rings, then says "Ello!' like me. Parrots live for ever and she's nowhere near 10 yet, so she'll live way after me. At least I know my voice will carry on for a bit after I'm gone: 'I'm up 'ere, you're down there!' " 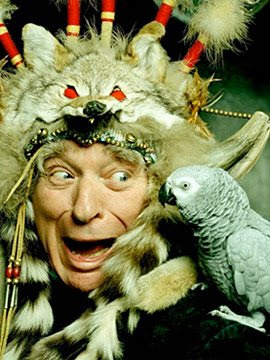